All articles tagged with "Humiliation"

Mistresses beat up guy for non-payment of rent

Mistress BlackDiamoond and her friends have an investment group. They had bought some rental properties and were now landladies. This guy had delayed to pay his rent and did not meet even a new deadline they had for him. They decided to punish him by trampling him and crushing his face with their feet. The cruel mistress soon forgot about the rent and had fun crushing and torturing him for fun. He paid the following day.

Mistress punish guy for being rude

Lady Nicole and her friend Lady Bertie do not like rude guys. They had gone to get a service from this guy but he was rude to them and they were spending their money in his shop. They decided to punish him and they did it in his back office. They trampled him and crushed him till he begged them to stop. They kicked him and made him offer the service for free.

Two hot mistresses force their new slave to lick boots. One mistress spits on the other's boots and forces the slave to clean it all off. The boots have to be absolutely spotless by the time the slave is done. The mistress then takes off her shoes and the slave must kiss and lick her bare feet, and if the mistress is unhappy the slave will be tortured even more!

Mistress went for a walk in the park, but the ground was all muddy and wet. Now her boots are dirty, so she makes her slave lick and clean all the dirt from her boots! He has to lick and clean her boots until they are sparkling clean again. He gets his whole face all brown and dirty, but mistress does not care as long as her boots are clean!

In this video a male slave is forced to lick the dirt and horseshit from his mistress' boots! So disgusting, there's so much dirt and muck on his mistress' boots but she doesn't care, she makes him keep cleaning them. She rubs the boots all over his head and his body, and stomps on him with the boots, and then makes him lick them to clean them! He has been a naughty slave!

These two young and sexy femdoms have their slave on the end of their leash and they are going to take this opportunity to show him his place beneath them. They make him clean the bottoms of their shoes with his tongue before they move on to make him feel stupid and pathetic. They spit right into his face and tell him how they feel about him and smear it with their feet.

Lady Alshari has brought her slave out into the public to make sure everyone can see just how pathetic he really is when he's on his leash and serving her. She leads him around by the neck, making sure to show him off to anyone who happens to drive by. Once she finds a good spot, she gets him down on his knees and orders him to clean her boots. 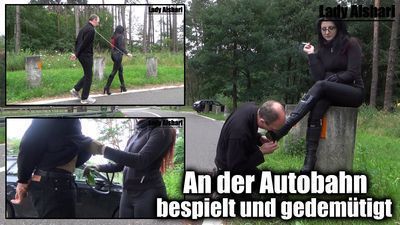 Mistress has fun humiliating guy for no reason

There is nothing this mistress enjoys more than humiliating others. While other people go out to do what they need to do, she goes out to look for guys to humiliate. And she found one. She went back home with him and she made him lick the dirty soles of her boots before using the same boots to trample him and humiliate him. She had lots of fun while the guy she humiliated was degraded. 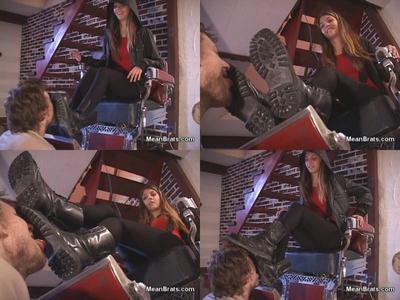 Madame Marissa wanted some luggage brought to her. But this guy she sent brought the wrong one. She was pissed and punished him for wasting her time. She beat him up, trampled him and kicked him before making him lick the soles of her high heels. She then threw him in the trunk of the car before she drove to get the luggage she wanted. That taught the guy a lesson he will never forget.

Sexy and blonde Mistress Annabelle has just gotten back home and she has a very serious problem: Her boots are way too dirty for her liking. Of course she has the solution, which is to force her pathetic foot slave to clean each and every single inch of her pretty black high heel boots with his tongue. She then forces him to swallow all of the mud to keep it off the floor.